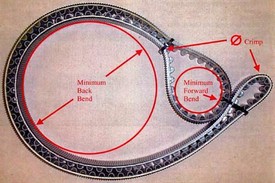 Examples of this are:

Crimping of the timing belt occurs when enough bending pressure is put on the belt in a small radius so that a permanent "set" is formed in the timing belt. The timing belt will often take on the outline of a fish head. Crimping damages the tensile cords and will result in premature failure. DO NOT crimp timing belts.

When handling timing belts, forward bends (bends that cause the teeth to come together) should be limited to the following minimum diameter for the given belt pitch.

Back Bending the Timing Belt

When handling timing belts, back bends (bends that spread the teeth apart) should be limited to the following minimum diameter for the given belt pitch.

Timing belts should be stored in a cool and dry environment with no direct sunlight.

Timing belt quality will not change significantly within eight (8) years of proper storage, as outlined in Rubber Manufacturers Technical Bulletin IP-3-4. A proper storage environment has been defined as an ambient temperature of less than 85°F and relative humidity of less than 70%. Service life is expected to decrease 10% per year for each year of storage beyond eight (8) years. In addition, storage limitation decreases by 50% for each 15°F increase in storage temperature. Storage temperatures should never exceed 115°F.

Typically timing belts are hung from pins or saddles, or “nested” inside one another. Pfeifer Industries recommends that you try to AVOID nesting the belts at all costs; particularly in the smaller length timing belts (i.e. 8M-640mm, 8M-720, 8M-800, 8M-896). Nesting smaller belts creates small radii which could DAMAGE the tensile members in the belts. Timing belts should not be bent tighter than the smallest recommended sprocket diameter for that cross section on the inside (2-1/4” for 8mm Pitch and 5” for 14mm pitch). This was particular evident with the Gates PolyChain® GT timing belts where you could bend the belts and actually hear the tensile members cracking inside the belt, thus rendering it useless.